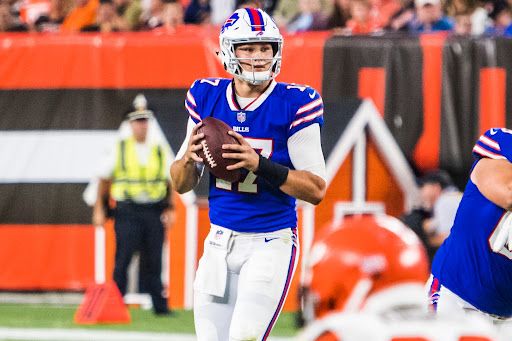 Josh Allen and the Buffalo Bills enter their Week 6 matchup with the Tennessee Titans with a 4-1 record. Allen has found his groove early this season completing 62.3% of his passes for 1,370 yards and 12 touchdowns. The Titans are coming in with a 3-2 record behind their star running back Derrick Henry.

Henry has rushed for 640 yards and seven touchdowns on 142 attempts this season. The Titans had a massive amount of hype heading into the 2021-22 NFL season, but that hype has yet to be seen. When the Titans acquired Julio Jones from the Atlanta Falcons, NFL fans thought the Titans were Super Bowl contenders.

The narrative to the Titans team remains the same with Julio Jones. Tennessee runs their offense through Derrick Henry and is still missing a piece. Mike Vrabel and the Titans are at a crossroad early this season and it could get on the right track with a win against Buffalo.

Can the Buffalo Bills dethrone the Kansas City Chiefs?

The Buffalo Bills came within one game of making a Super Bowl appearance last season. Josh Allen fell to Patrick Mahomes and the Kansas City Chiefs in the AFC Championship game. That brings us to our original question, can the Bills dethrone the Chiefs?

Buffalo enters their Week 6 matchup against the Titans with the best defense in the NFL. The Bills are only surrendering 251.8 yards per game to opposing teams. Sean McDermott’s defense has forced 11 turnovers through five weeks this season.

Buffalo’s offense led the team to the AFC Championship Game, but their defense fell short. Now that the Bills’ defense seems on track, Buffalo has a great shot at dethroning the Kansas City Chiefs this season.

When the news broke about Julio Jones being traded to the Tennessee Titans, the NFL went insane. The Titans jumped to Super Bowl contenders behind their rushing attack and wide receiver combo. Unfortunately, Tennessee hasn’t received the outcome that they’d hope for from Brown and Jones.

AJ Brown has only caught ten of his 25 targets this season for 130 yards and a touchdown. Julio Jones has made more of an impact on the Titans. Jones has caught 12 of his 18 targets for 204 yards through five games.

The question remains the same, why hasn’t the talented combo worked for the Tennessee Titans? Mike Vrabel’s offense isn’t set up for an air raid-style offense. Instead, the Titans run their offense through their running game. That alone could be the reason why the combo hasn’t worked out.